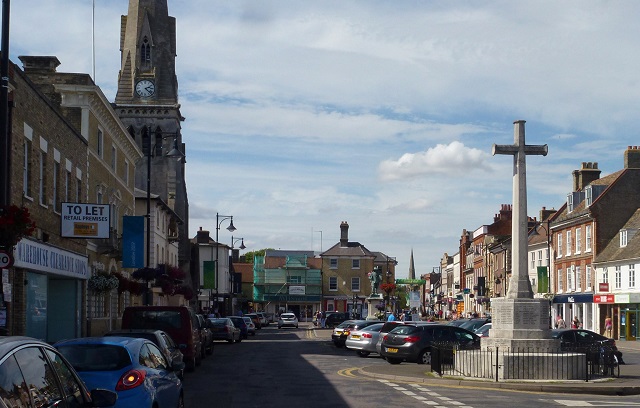 St. Ives in Cambridgeshire is a town offering an abundance of old-world English delights, and the jewel in its crown is the world-famous markets. A notable feature of the town since the 10th century, the markets might have evolved from the cattle and cloth stalls of those days, but the atmosphere and charm remain similarly bustling and eclectic.

The history books state that the first St Ives Market was held in 1110, by Ramsey Abbey, who requested the approval of King Henry I. The first “St Ives Fair” lasted for eight days and continued to grow in size and popularity throughout the centuries, reaching its peak in the 13th century. Competing market towns, such as Winchester and Northampton, may have stolen some of St Ives' economic thunder in the 14th century, but the market remained vibrant and is still one of the largest of its kind in the country today.

The modern market is a common draw for tourists, but locals also tend to frequent both the Market Hill and Sheepmarket locations every Monday and Friday, with the Monday market comfortably the more comprehensive. Generally speaking, the same stalls return week after week. If you happen to chance upon a stall one Monday morning that you're particularly enamoured with, it will be ready and waiting for you either the same Friday or the following Monday.

Free from the ugly commercial scaffolding and rowdy hawkers that typify most modern British markets, St Ives Market is a far friendlier and more traditional proposition. The stalls are all well-maintained and fully vetted by Huntingdonshire District Council, so you won't find any rogue traders.

The historic St Ives Bank Holiday Markets are even more popular, drawing traders and tourists from across the country and beyond. Every Bank Holiday Monday, the market swells in size to effectively take over the whole town.

Although the weekly Monday and Friday markets might be more well-known, an award-winning St Ives Farmers' Market also takes place every first and third Saturday of the month. It might not be able to claim the history of its more famous cousin (it only started in 2003), but its easy-to-access location in the city centre and healthy word-of-mouth has led to it becoming its very own institution.

Located in the beating heart of the town centre, the market boasts stalls from only the finest local merchants, all touting locally sourced produce. The market claims that all produce sold on the stalls is sourced within a 30 miles radius of St Ives itself. Produce found at the market is always fresh and in season, but is also surprisingly affordable, steering well clear of the self-knowingly 'trendy', overpriced goods you'll find on Camden Market.

The real selling point of the Farmers' Market, however, is that shoppers get the chance to talk directly to the farmers themselves. This builds an electric, friendly atmosphere that encourages shoppers to ask questions and sample produce before buying. Trust us, you'll be even more likely to enjoy a spectacular cut of meat if you've had a conversation with the man who reared the cow it was cut from.

The Farmers' market also boasts experiences that elevate it above a mere shopping trip. From competitions and tastings to cookery demonstrations and scheduled talks, it's a legitimate day-out for the whole family, not just an excuse to stock up on tasty treats.

The Monday/Friday market and the bi-weekly Farmers' market are enjoyed for locals and tourists alike throughout the year. However, there are also seasonal markets to enjoy in St Ives. The Victorian Christmas Market is a real treat for those looking to catch a glimpse of what the markets might have looked like over 100 years ago, whilst the Continental Street Fair and Craft Beer Festival offer more far-reaching delights that are sure to keep you coming back to St Ives to fill your bellies and soothe your souls.