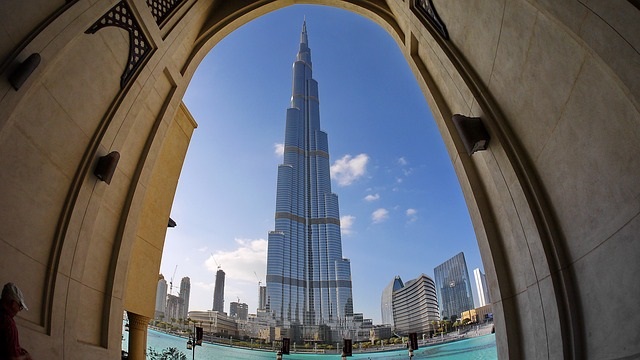 There’s something undeniably compelling about a large building. Stretching up into the heavens or spreading across the landscape, these engineering marvels are both testaments to progress and tourist spots. But while we might stop to gaze in wonder, how many of us actually think about how they were built?

Architectural perfection is very difficult to achieve. Without the use of scaffolding, many of the landmarks we know today would never have evolved past the design stage. From London to Lisbon and from St Helens to St Ives, scaffolding has been used throughout recent history to build some of the most awe-inspiring and iconic buildings in the world.

Here, we’ve managed to compile what we think are some of the world’s most astounding and inspiring scaffolding projects to add to your architectural bucket list.

It’s famous for having Tom Cruise dangling off the side of it in Mission Impossible, but the Burj Khalifa is also renowned for (still) being both the world’s tallest building and the world’s largest freestanding structure at 829 metres and 163 floors. This dynamic and iconic building took around six years to build and the complex scaffolding construction was not only used for logistical reasons but to hide the design of the building from the rest of the world as it was being built.

Although not particularly tall (at least when compared to some of the other structures here), construction of the Eden Project in Cornwall was a monumental undertaking. It used so much scaffolding that it made its way into the Guinness World Records book. When it was built in 1998, the construction of the educational eco-domes used a staggering 230 miles worth of heavy-duty scaffold. The two domes (or ‘biomes’) that make up the Eden Project take up a combined 5.7 acres and have become one of the top tourist attractions in the UK.

One of the busiest and most impressive transport terminals in the world, Victoria Station in London sees around 80 million passengers pass through its gates every year, making it impossible to shut it down during its major refurbishment in 2011. The gorgeous and iconic roof, which was first constructed in 1865, required some serious maintenance and a multimillion pound project was launched to enable refurbishment without interrupting commuters. The heavily customised scaffolding used hung above the concourse to ensure minor disruption and looked truly bizarre in the best possible way. A genuine feat of modern engineering.

The Statue of Liberty

Before the construction of the Eden Project, the World Record for scaffolding was held by works on the Statue of Liberty in the 1980s. The project was a GIANT undertaking that required a brand new kind of aluminium scaffolding. Costing $2 million to erect and standing as the largest and most complex freestanding scaffold at the time, it’s still perhaps one of the most famous and revered uses of scaffolding.

Our final structure is definitely special enough to warrant inclusion on this list. Constructed in 1933 in Santa Clara County in California, and still one of the world’s most impressive freestanding structures, it was first built as a hangar for the USS Macon airship. To accommodate the sheer size and shape of the blimp, bespoke scaffolding had to be designed to create this gigantic and still completely unique oddity. In 2011 the structure’s exterior panels had to be removed, prompting another major project and to this day, the domed scaffolding inside the hangar stands alone as one of the most inspirational construction projects ever conceived.